SCREAM (1996, Wes Craven) and THE CABIN IN THE WOODS (2011, Drew Goddard) (CITW for short) are both horror films that are aware of the genre tropes. Both writer and directors of the films, Wes Craven and Kevin Williamson for SCREAM and Joss Whedon and Drew Goddard for CITW, knew the horror tropes and created films that make them self-aware or ‘meta’.

The term ‘meta’ is a post-modern idea that a piece of work is self-aware, and subverts mainstream conventions, or in this context subverting horror tropes, all the while making/implying to different texts, otherwise known as intertextual references . At the end of my research the idea behind ‘meta’[1] and self-referential cinema in horror will hopefully be made clear in the two films. SCREAM, released in 1996, is a slasher-horror film which is seen as the first horror film to refer to, and humourize, previous horror films and make them a part of the film world, as evidenced here, “Craven and his clever screenwriter, Kevin Williamson, knowingly play with all the clichés of the teen horror movie by making all the characters horror-movie junkies themselves.”[2] Wes Craven is seen to have furthered the ideas he had shown in WES CRAVEN’S NEW NIGHTMARE (1994, Wes Craven), the seventh film in the popular and influential A NIGHTMARE ON ELM STREET series; the film itself is aware of the film industry and ‘real-world’ and makes the iconic horror character Freddy Krueger reign terror in this ‘world’. THE CABIN IN THE WOODS was released in 2011; critics and audiences praised its take on THE EVIL DEAD (1981, Sam Raimi) thematic horror film and its ‘meta’ themes that were present in its narrative, as shown here, “…combines horror, comedy and a slew of sly allusions to movies ranging from the familiar to the for-serious-buff-only … you know who you are.”[3] The study will be structured to cover the two films, narrative, characters, themes and the style. In order to come to a conclusion, the two films will be assessed by the four elements, so that in the end there will be a determination as to how far each of the films subvert the horror genre.

The narrative construction of SCREAM is formed by a singular narrative, from beginning to the “completely atypical Grand Guignol finale”[4]. We have the opening bloodshed moment at the beginning, with Drew Barrymore’s Casey getting murdered at the start, “For all its banter, the scene is conceptually upsetting and efficiently terrifying”[5], Casey getting punished for not having the right answer to a simple horror movie trivia question. The narrative continues into a straightforward slasher-stalker film with the final denouement taking place in the “typical haunted house setting”[6], with just the main characters left for the final kills and final reveal of the who the killers are.

The explicit disregard for generis conventions is summed up in this online review, “Stop me if you’ve heard this before. Five young, attractive friends take a weekend trip to a remote cabin deep in the woods, but after a night of partying and a dark discovery in the basement they soon find themselves in a fight for their lives against a nightmarish enemy. As well as you think you know this story, you are wrong.”[7] CITW is originally shown as two separate narratives, one with the main archetypal group in the cabin, and the other taking place in an office environment. These two narratives end up becoming interlinked, with one revealing facts to the audience that neither of the narrative arcs are aware of. For example we learn that the murdering of the teens is for a sacrifice, before the teens are aware of this; another example is that we learn that Dana can live if Marty dies, before Marty and Dana get told this in the final sequence. These two omniscient narratives are joined, the editing “cutting between them at exactly the right moments to keep the equilibrium right and the feeling fresh.”[8] This narrative construction is a band apart from the generic singular narrative that runs in atypical horror films; therefore a totally unconventional approach by having the two interlinking stylistically different narratives.

In both of the films the modern interpretation of the classic high school character archetypes are present: the Jock, the Whore, the Virgin, the Brain/Geek, and the Clown/Stoner. In SCREA,, Randy is the Geek which is shown by his extensive film knowledge and analysis of the films events; Stu can be seen as the clown which is shown by him teasing Sydney and Tatum; Billy is the attractive Jock or the ‘attractive’ alpha male of the group’; Tatum can be seen as the slut, evidenced by her dress code and atypical language; and finally Sydney as the Virgin, the innocent girl tortured by the films events, referenced in the horror theory known as ‘The Final Girl’[9] In CITW, the archetypes are explicitly shown, mainly as a narrative feature and an analysis on the horror genre aswell, Jules is the Whore; Dana the Virgin; Curt the Athlete; Holden the Scholar (or Geek); and Marty the Jester (Clown/Stoner). These archetypes are explicitly talked about in the final sequence when Sigourney Weaver explains about the ritual. This is also evidenced in the films publicity material, seen below a fan made poster, identifying each of the characters archetypal roles.[10]

‘The Final Girl’ is term used in Carol J. Clover‘s 1992 book Men, Women, and Chainsaws; “The book introduced the term “final girl” (the virginal “good” female who often becomes the final victim or lone survivor at during the final act of a horror film)”[11]. In CITW it is explicitly spoken that the Virgin can either die or live, but only if she suffers, “has she suffered” Hadley quips. The film references the idea of the final girl, a meta reference, which is not what ‘Scream’ does. ‘Scream’ only shows the ‘final girl’ as character, not explicitly referencing Sydney as one, she is a tortured innocent girl, but is can only be identified as a case study for the term; not like Dana in ‘CITW’ who is told that she is the Virgin, the one that can live and save the world (ultimately she doesn’t, she gets bitten by a werewolf and her opportunity to save the world is gone).

Both films touch on the idea of punishment as an excuse or an ideal to kill. In SCREAM, Stu and Billy use it as a way to punish Sydney for her mother’s affair with Billy’s father, breaking up his family. The Stu only gets involved because of peer pressure, being forced by Billy to help him commit his murders, “it’s no spoiler to reveal that Ghostface turns out to be two of the heroine’s school friends working together”[12] As has already been discussed, CITW deals with punishment as a basis for the ritual to the Gods. It can be interpreted that the ‘Gods’ are in fact the movie viewing audience, and the actions of Hadley and Sitterson are in fact the writers trying to please them, through genre conventions and themes that are universally recognised, e.g. ritual. The punishment idea from the movie audiences perspective could be seen as necessary to please them, as if the gore, nude shots, and scares aren’t good enough then the movie would not succeed and/or be criticised. To have this as an underlying theme shows that CITW is a meta film, knowingly self-aware of the genre and what the audience expects from it.

In SCREAM Craven uses tricks from the horror catalogue to elicit scares, these include jump scares (when Ghostface jumps through the French doors at the start), inventive kills (Tatum death by the cat flap in the garage door), and outright gore (Casey’s boyfriends guts hanging out on the patio), all of which is stock iconography of the genre. The film also includes stock locations, the high school, the bedroom, and the ‘haunted’ house at the end. However Williamson and Craven include a scene which takes place in a video-rental store, with Randy spelling out the references to different horror films that the killer is making, saying that in order to survive everyone has to watch PROM NIGHT, these intertextual references are key to the idea of a ‘meta’ film. They also include as a major plot device, the mobile phone, the action throughout the film could not have taken place if not for it; the inclusion of which grounds the film as modern, showing its post-modern roots. CITW begins with the title card being shown over a frozen image, the red colour and the capital letters filling up the screen, this harkens back to 70’s horror films, like LAST HOUSE ON THE LEFT (1972, Wes Craven), where the title overpowers the audience, a reference to the atypical horror iconography of the 70’s (a title card which is also shown in 2009’s THE HOUSE OF THE DEVIL (2009, Ti West). The film itself contains generic horror monsters, which are iconic to the genre. 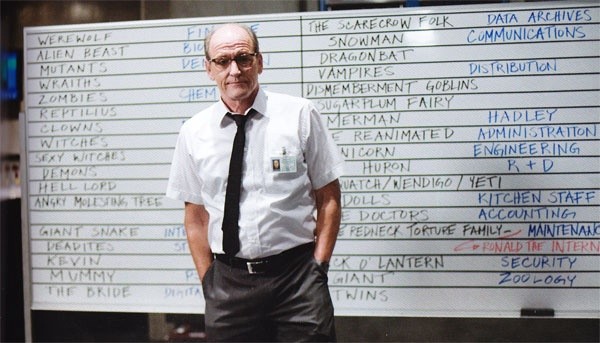 On the board and in the elevator purge sequence, the film makes explicit references to different films, intertextual references again, a love letter to a variety of different horror classics, HELLRAISER (1987, Clive Barker), IT (1990, Tommy Lee Wallace), THE SHINING (1980, Stanley Kubrick), THE WOLFMAN (1941, George Waggner), POLTERGEIST (1982, Tobe Hooper), and DAWN OF THE DEAD (1978, George A. Romero) being a few shown in the elevator purge sequence, and referenced on the board (shown below [13]). This causes the audience to recognise (judging on their horror movie knowledge) these conventions, again as mentioned before as a way to please movie audiences.

Both quotes below put into a summarisation of the similarities and contrasts between the two films:

“The Cabin in the Woods is the anti-Scream. Where Wes Craven’s seminal film dismantled the slasher genre, reveling in the deconstruction and poking fun at the tropes of horror, Drew Goddard’s directorial debut revels in the tropes.”[14]

“Both movies are incredibly smart and aware of the genre they’re running through, but where Wes Craven’s and Kevin Williamson’s film brought the meta elements to the forefront with their characters’ words, Goddard and Whedon are more trusting of the audience’s collective genre knowledge.”[15]

Both films subvert the genre conventions; SCREAM with slasher horror, CITW with cabin movies, and horror in general. The ‘meta’ aspect is shown through explicit intertextual references in Williamson’s script for SCREAM; whereas CITW uses the chance to make meta references, and wink to certain films/franchises, to make a comment on the audience and filmmakers in general.

[8] Devin Faraci. (2012). Movie Review: THE CABIN IN THE WOODS Is Game-Changingly Great