Humanity has a lot to answer for. From the worst that we have taken, to the wonders that we have given. It’s fair to say that ARRIVAL gives both sides of the coin a tough examination.

What has driven us to do the horrible things we do? Fear?

What has driven us to do the wonderful things we do? Hope?

ARRIVAL is a simple story that has been told umpteenth times. Aliens arrive, work together to find out….blah blah yadda yadda. What director Denis Villeneuve and screenwriter Eric Heisserer have done, have opened up the trope to themes of humanity. That is what some of the best science-fiction films have done in the past. Question what we are doing.

I am trying very hard to veer away from spoiler territory, as it is best to go in hardly knowing anything. 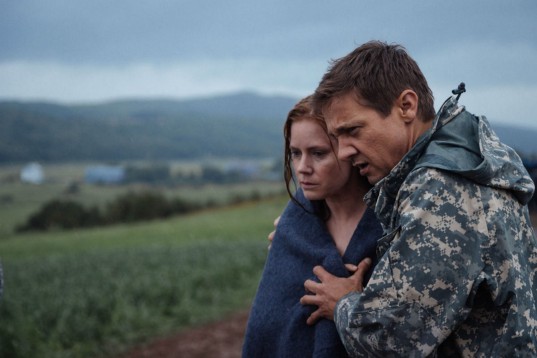 Needless to say, Villeneuve and Heisserer have brought us the best film of the year. Which is funny, seeing as my favourite (and ‘best’) film of 2015 was MAD MAX: FURY ROAD; an action sci-fi film built on the destruction of the civilised world. ARRIVAL is a dramatic science-fiction film built on humanity. Funny what a year brings us.

Long time Villeneuve collaborator Jóhann Jóhannsson has built an original score around the film, which sells the wonder and then some. Opting away from bombastic notes and overwhelming orchestra; he plays everything subtle, but hitting every mark with an exclamation point at the end of it. Maybe the best score of the year, definitely of the composers, already fantastic, work.

I have mentioned here before the Villeneuve’s framing is never wasted, always deliberate. ARRIVAL is no exception. Following on from his work with Roger Deakins in SICARIO, Bradford Young is his next collaborator. This is an inspired choice as he is well known for his work in dramas, not big budget sci-fi. This leads to some fantastic shots, intimate yet totally awe-inspiring.

Finally, Amy Adams. Yes, Jeremy Renner and Forest Whitaker (and Michael Stuhlbarg) are all in this, all giving fine performances. But Amy Adams is something else entirely. She elevates the material tenfold, her emotion is surface level, her life is lived. Best performance of the year bar none (by someone who isn’t a corpse).

ARRIVAL is the best film of the year. I know we still have another month left (including a certain Death Star), but what with recent events this is truly of the moment but somehow timeless. We have a classic in science fiction, in cinema, in creativity.

A true recommendation if ever there was one.