Ugly shots of metal under skin, sounds of metal crackling and scraping, and feelings of unease throughout. That’s the TETSUO trilogy.

Made up of 1989’s TETSUO: THE IRON MAN, 1992’s TETSUO II: THE BODY HAMMER and 2009’s TETSUO: THE BULLET MAN, Shinya Tsukamato has carved a unique trilogy of films. Whilst arguably the quality of each slides downward (the dialogue in the 3rd film is almost laughable), the themes and images elevate the material to influential. 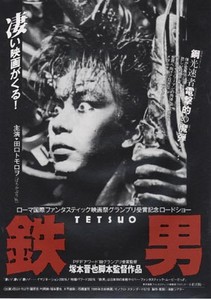 The metal fetishist is obsessed with becoming better than human that much is clear in the first shots of TETSUO: THE IRON MAN. Tsukamato intercuts the metal and agony with picture of athletes, reinforcing his drive to be the pinnacle of human physique. However, it goes wrong, maggots crawl around the wound, the horror if which forces him to run, ending up in front of a car. The driver and his wife (whom we later learn had sex in front of his staring corpse) both feel guilt later on, but the driver (who is an accountant/banker) ends up becoming ‘infected’ with the metal. Throughout his transformation, Tsukamato shows us the sacrifices that have to be made for him to be ‘improved’ upon. The loss of not being in control (the dream sequence with his wife with a metal tube), and the eventual loss of his wife with the extreme transformation of what makes him a man (the drill). Tellingly enough, that can also be interpreted as hyper-masculinity something that is touched upon further in TETSUO II: THE BODY HAMMER. With the fight between the resurrected metal fetishist and the fully transformed Iron Man, the monochromatic photography and editing go into hyperdrive, forcing the viewer to make sense of the chaos. Tsukamato plays with the limits of his film here, allowing the scope to never seem small. The final shot of the two merged together in a cacophony of metal and flesh, driving towards the centre of Tokyo to destroy it and the world represents the anger and destruction they have at becoming the pinnacle of metal and human. 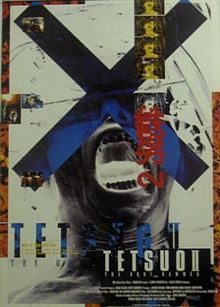 Whilst not a sequel in the strictest sense of the words, TETSUO II: THE BODY HAMMER is more of a continuation of the themes that Tsukamato presented in the first instalment. Hyper-masculinity is one that is at the forefront here, with the images of men working out in an industrial setting. It’s interesting to note that Tsukamato works in the guilt aspect more in this one, incorporating anger as a driving emotion that leads to his transformation. Something that Tsukamato explores here (and returns to in the third instalment) is paying for the mistakes of our fathers. It turns out that the main fight between antagonist and protagonist, is actually between brothers; long ago having killed their parents and suffered mentally for it. The loss of his son drives him to anger, triggering the transformation that his father had once built in him. We see the ‘better than human’ aspect come into play again, the husband turning into a grotesque creature conjoined with the other infected. This represents his grief, his wife having learned his past, stands by him choosing to live with his choice. 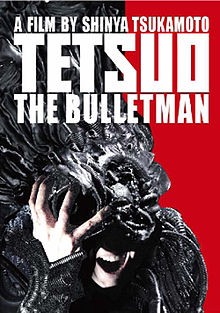 His first English language film, Tsukamato reinterprets all the ideas from the previous TETSUO films. Along with some dodgy translation, and a rehash of plot, this is the weakest of the three. The anger of losing his son awakens his potential to be the Iron Man; his father created him when saving his mother; the fight with someone who wants him to get angry and transform. All of these things have been touched on, better in some respects, by Tsukamato. What sets this one apart though is that the protagonist doesn’t end the film as a monster. He chooses to move on, helped by the revelation that his wife is pregnant with a second child. A ‘5 years later’ title card reveals that he is a happy man, but we hear the ominous voice telling him that “…[he] doesn’t want me inside of you”, leaving open interpretation that the monster could awaken again. However, this ending is the most happy, if you can call it that, of the trilogy.

There is a lot more that could be said with the aesthetics of the trilogy, but having chosen to talk about the themes, I am hopeful that the TETSUO trilogy won’t just be renowned for its look, visuals, and craziness. Even if that is the intention of Shinya Tsukamato.