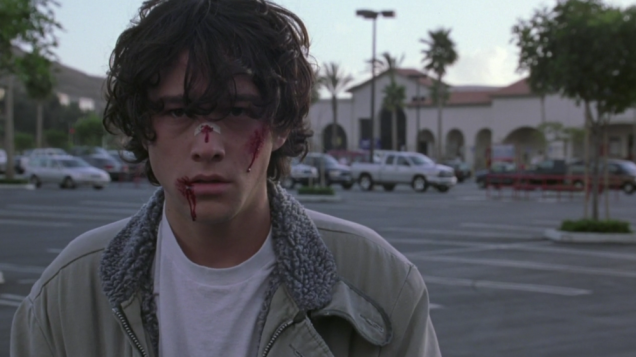 Nathan Johnson’s syncopated composition plays over the screen. A reaction shot of a dead girl lying in a stream. A sad face contemplates what has been witnessed. Brick starts as confidently as it goes on.

Written as a novel when he was 23, yet not filmed until he reached 30, Rian Johnson’s debut feature film is full of the bravado you would expect from a well-seasoned filmmaker, not from someone undertaking their first screen outing.

The blue-green tinted visuals revel in the noir tropes of old, the Hammett like structure of a crime thriller unravels in front of the viewer but is played as part of a familiar backdrop, the teen-movie. Constructed in a way that showcases the conventions of both film-noir and of the high-school film, Brick shows itself diving headfirst into a world we should find recognisable however we have to stand at a uncomfortable distance, this is due to the words spoken, to the cold performances of the young actors.

We get the Jock, the Nerd, the Outsider, the Popular Girl. We see the drama club, the high-school party, the vice-principals office. But all of this is shrouded in a world of hard drugs, murder, sex, betrayal and crime.

The stylised dialogue, reminds us we are watching a film which is a farcry from the John Hughes teen films of the 80s, from the American Pie gross-out teen comedies of the late 90s and early 00s.

This is a “folly of youth” that is unfolding before us, just with the maturity of the hard-boiled detective, the dangerous sexiness of the femme fatale, the aggressive muscle, the physically challenged yet mentally brilliant crime lord.

We have to give credit to Joseph Gordon Levitt’s turn as Brendan, confident, assured, mature; this is something we take for granted when we see him on screen now, but back in 2005 this was something only a select few cinemagoers witnessed.

Special mention has to go to the wonderful Nora Zehetner as Laura, the femme fatale. She pulls of the delicate, seductive yet very manipulative girl that aspires to be something more than a pawn and a user. She could easily be placed in a 1940s noir film and not seem out of place.

Rian Johnson has all the tropes of a teen movie and a film noir nailed down, he is well versed in each of the moments we expect, and he marries them together with such aplomb. This is a finely crafted debut feature film.

The parting shot is on a football field, we dream to think of The Breakfast Club. But Simple Minds won’t play, this isn’t a triumphant ending. Brick ends as it went on, a word uttered, awaiting to be untangled from its web.