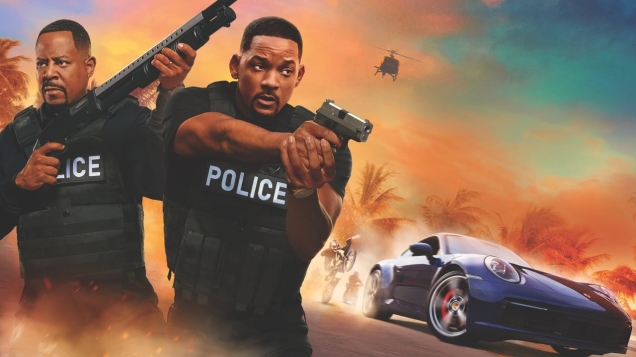 This series focuses on the one and only Michael Bay. Attempting to deconstruct his filmography, one film at a time. The ideas explored here may or may not end up in my Dissertation about Michael Bay and Post-Cinema.

And to answer the question: Does it ever rain in a Michael Bay movie?

It is fitting that the last film (until Michael Bay releases his next feature) in this series for my dissertation should be a sequel to Michael Bay’s own original property, BAD BOYS.

The reason for looking at this sequel is to help identify what different filmmakers do with a similar playset. BAD BOYS FOR LIFE is the most coherent and mature in the series, and that might have something to do with the fact that Michael Bay isn’t directing this one. It’s Belgian duo, Adil El Arbi and Bilall Fallah.

The Don Simpson/Jerry Bruckheimer ident with the lightning plays and I get a slight tingle down my spine. It’s been a while since we have seen that in front of a movie, 2003 in fact with BAD BOYS II, so the expectation that this just carries on is quite high. But this isn’t that movie. Like I have said before, this is more coherent and mature, and dare I say contians the anti-Bay element of pathos.

The script is simple enough, there is a thematic simplicity and poetry to the plot. Deals with death and mortality, and loss. What the film ends up doing is almost becoming a mediation on the career of Will Smith as it is the story of Mike Lowery which is central. Martin Lawrence as Marcus Burnett seems to be enjoying being back in the limelight, and has great fun bouncing off the his partner. I am going to keep the plot details to a minimum, although I got to say it is weird we get a remake to GEMINI MAN not 6 months after its release. It is solid scriptwriting, BAD BOYS FOR LIFE is more committed to the characters than Bay ever was.

But, how is the action? It is very effrective, very clean, and whilst it does have style it doesn’t really have a personality. It is lacking the chaotic freneticism of Michael Bays action beats. The editing and shot lengths don’t go to the extremes of Bay. Miami almost feels too ‘made-for-TV’ which kinda makes sense seeing as part of the film were shot in Atlanta. The final action set-piece is very well structured, it has the staples of an action film, but it feels too ‘of-type’. This isn’t neccessarily a bad thing but something is missing. There is an immaturity but it isn’t nearly as juvenile or cruel, and is nowhere near as extreme total disregard of everyone that BAD BOYS II possesses.

There are some subtle shot homages to its predessessors. The first play of the classic low-angle, tilt-up cirtcular shot is played for laughs, but comes back later in a more traditional aspect. Michael Bay also cameos, and the shot of him talking is quite something. I wouldn’t be surprised if it was his idea.

All the elements of a BAD BOYS movie are here. But, and this isn’t a criticism, this isn’t a BAD BOYS movie. The first one is chaotic, unhinged, deranged, uncaring, and juvenile, with the BAD BOYS II merely cranking it up to 20. And thats what I like about them. BAD BOYS FOR LIFE is not a bad movie, but it could never live up to the name of its predessessors despite its undeniable solidity.

Does it rain? Yep.

Next up: The Video Essays