[This article is an edited version of an assignment originally written for my MSc.]

Arguably the first summer blockbuster, Jaws is an Ahab-like tale of a journey to kill a shark which has been terrorising the waters of Amity Island. The film, which starred Roy Scheider, Richard Dreyfuss and Robert Shaw, grossed $470.7m worldwide in the box-office from a production budget of $12m.

However, I want to go explore how the film has more beneath the surface than just it being the blockbuster classic it is viewed today. As I will go into more detail, I feel that Jaws tells more of American attitudes, American politics, and also the values held by the movie studios of the era, than what is immediately shown.

The 4th of July weekend for the Amity Island residents is one of prosperity. Within the film, the ‘Islanders’ gain a lot of business for the holiday weekend, therefore when their businesses and way of life is threatened, they feel scared and angry. The Islanders question Chief Brody (Roy Scheider), “Are you going to close the beaches?”, after replying he his, the Mayor appeases the upset crowd that it would only be for 24 hours. The financial hit is a more terrifying prospect for the Islanders than the prospect of death in the sea.

Before the film was made in 1974, Hollywood was reeling from severe financial losses. Tom Schatz makes the point that,

The studios were suffering, which led to the introduction of conglomerates into Hollywood, one example being the acquisition of Paramount by the Oil company, Gulf + Western in 1966. At the time of filming Jaws, Hollywood had had a string of mild successes in the form of Francis Ford Coppola’s The Godfather (1972) and The Exorcist (1973, William Friedkin), but nothing on the scale of what was to come with Jaws. Like the influx of vacationers on the island and their aversion to the sea, the audience had stayed away from the cinemas, and like the Mayor Larry Vaughn (Murray Hamilton), and the upset Islanders, the studios were trying to get the audience back into theatres.

This analogy of how Jaws represents the studio system in the early 1970s, is further shown by the polarised worldviews of Hooper (Richard Dreyfuss) and Quint (Robert Shaw). The new technological age of computer screens and money was resisted, or not being put to good use. When Star Wars was released by 20th Century Fox, it was the final of the films that came from the movie brats of New Hollywood. Francis Ford Coppola came from working inside the studio system to prove his worth, with The Godfather being the vindication. Steven Spielberg worked as director in TV, and low budget, low risk fare like The Sugarland Express (1974) before being given the directorial reins of Jaws. In the film, Quint is not convinced by Hooper; he states he has been “counting money”, his hands haven’t worked. Quint represents the old Hollywood, the one that had lost money on strings of failures, Hooper is Coppola, Spielberg, Lucas, the ones wanting to prove they are just as worthy as working on the boat, and trying to capture the shark. 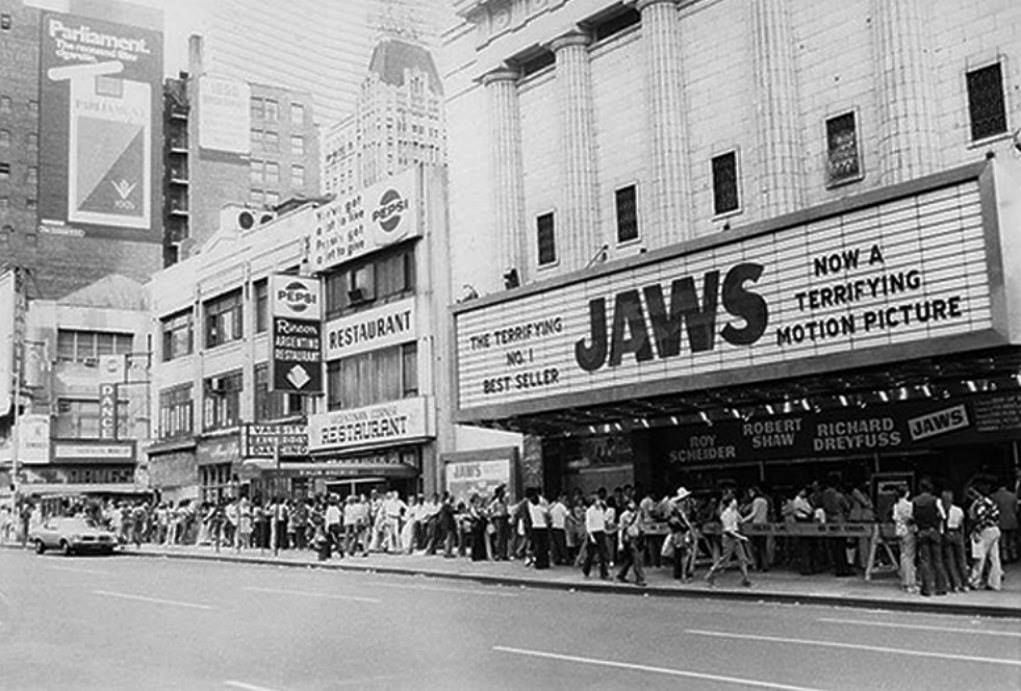 The late 1960s and early 1970s were a tumultuous time, not just for Hollywood, but for America. The US had pulled out its military force out of Vietnam in 1973, thereby ending direct US involvement in the country at that point. The sight of young people like Alex Kintner and Chrissie Watkins get killed, and the shock of the sight of death that affected Michael, can be an allusion to the Vietnam War. Here, young men were conscripted (until President Nixon stopped conscription) into fighting a war in a foreign country where despite the technologically superior weaponry available to the US, the War was a failure for the Superpower. In America, and worldwide, the public were seeing first-hand the horrors of war. Unlike WWII and the Korean War, the American public were being shown first hand by the news, through photography and film, the conflict. Images such as the My Lai massacre and the self-immolation of Thích Quảng Đức were available for the American public to see. This is very similar to the reactions of Chief Brody upon seeing the remains of Chrissie Watkins on the beach, or the anger and disbelief of Hooper when examining said remains. When Mrs Kintner hits Chief Brody for keeping the beaches open, despite knowing the dangers out at sea, this can be the image of many Mothers angry at the Government for sending their children to War.

Chief Brody is the isolationist version of America in the film. He is scared of the water, unable to get out of the car when on the water crossing from the mainland. America, pre-WWII, was unconcerned with getting involved in foreign conflicts; only choosing to join WWII after the direct attack on US soil in Pearl Harbour in 1941. The water represents War, the overseas. The sight of the shark under the water, bigger than originally thought, is the enemy, who are more ruthless and harder to eliminate than originally thought. Chief Brody is a regular American who is thrust into an uncomfortable and terrifying situation because of a sense of duty.

A parallel in another Steven Spielberg film, the WWII set, Saving Private Ryan (1998). In that film, Tom Hanks is Captain John H. Miller, whose journey we follow from the beaches on D-Day through to the finding of Private Ryan (Matt Damon). Much like Chief Brody, Captain Miller is representative of America; he is a school teacher thrust into an extraordinary situation due to a sense of duty, a sense of right and wrong.

In Jaws, Chief Brody goes on the Orca with Quint and Hooper, because of a sense of duty, he feels it is his responsibility. That responsibility of America, is what ended up with US forces joining the Vietnam War directly under President Johnson. It was to stop the ‘Domino Effect’ of Communism overtaking the free-world; a McCarthyistic idea of fear and righteousness, which is representative by the role of Chief Brody. This is none more evident in the shot of the Orca leaving the harbour of Amity Island, the camera peering through the window of Quints house with the jaw of a shark framing and surrounding the boat. The jaws of the shark are closing in on the Orca and its crew as it heads out to sea, like how the US forces head out to war.

Quint, however, bears the scars of War. During a sequence where Chief Brody, Hooper and Quint bond, Hooper and Quint both reveal their scars and ‘war-wounds’, be through fishing, arm-wrestling, or the metaphorical breaking of one’s heart. Chief Brody asks about the scar on Quints arm, who points to a laughing Hooper that it is a removed tattoo of the USS Indianapolis. Hooper, immediately stops laughing, asking “You were on the Indianapolis?”. Chief Brody, however, had not heard of the ship, its mission, its sinking and tragedy. Through Quints retelling of the events of the sinking and the men waiting rescue, the shot is a two-shot, Robert Shaw is in focus, Hooper behind him looking at Quint tell the story. The monologue, is broken by single shots of Chief Brody looking on with a forlorn expression. Quint signs off his monologue, “Anyway, we delivered the bomb”. Almost as a punchline, the final sentence reads as though the greater mission of delivering the Hiroshima bomb to effectively end the war was worth the tragedy. Which is how the American governments of Johnson and Nixon would see the Vietnam War. If the horrors of war were justified in the stopping of the Communist machine of the Soviet Union and China, then American intervention was worth the cost. However, Quint is eaten by the shark; that view of cost of conflict is not applicable to the Vietnam War.

In his article, ‘JAWS, Ideology and film theory’, Stephen Heath makes the point that, “the ideology of Jaws is clear enough, the province of a traditional ‘content analysis.’ Jaws is a Watergate film…”

Domestically, in from 1970 to 1975, American politics was at a turning point for the then President Nixon. However, Jaws, as has been shown by the representation of American foreign policy at the time within the film, goes further than that at a domestic level. Whilst the June 1972 break in of the Democratic National Committee headquarters is a relevant event that is shown in the film, it is the combination of this event, the Kent State Shooting on May 4th 1970, and the publishing of the Pentagon Papers in the New York Times in 1971, which are also present within the text of Jaws. This is all inextricably linked with the Vietnam War and the consequences of the conflict.

The events of the Kent State Shooting were one of many events that signified the discontent between the youth, anti-establishment and the Government. The 4 student demonstrators that were gunned down in an anti-war rally, can be interpreted as a manifestation of the disunity of the public and the US Government. In Jaws, the victims of the shark are accidents which could have been averted. The tragedy of the lost lives of Alex Kintner and the ‘Estuary Victim’ in particular, are the innocents who were let down by an administration in charge.

The undermining and seek for justice led to the publication of the Pentagon Papers in the New York Times in 1971. Here, Daniel Ellsberg a former employee of the US Defence Department leaked documents which showed that the Johnson administration had lied to the public and to Congress, and showing the involvement of the US from 1945 to 1967. The reaction from the President, was that no further was he to be taken aback by such developments. Like the actions of Mayor Vaughn, President Nixon wanted to keep the public oblivious to the facts. Mayor Vaughn is seen conversing with the Medical Examiner to reconsider his medical opinion as to the death of Chrissie Watkins from a ‘shark attack’ to a boating accident. President Nixon wanted to control the narrative of the White House, this ultimately led to Watergate and his eventual resignation in 1974.

The ‘Islanders’, as already stated, represent an America wanting to continue their lives. The Mayor, or Nixon, wants to keep feeding them a narrative that ignores the horrors out to see, that hides his duplicitous nature. In the film, Mayor Vaughn finally gives in to the request of Brody and signs the document to hire Quint to kill the shark. Nixon resigned from the Presidency due to the Watergate scandal and its cover-up in 1974. Jaws, like Heath stated, is a film about Watergate. But to solely pin the film on Watergate, would be detrimental to the events that came before and are linked to the scandal. The intention of the film is to create a suspenseful thriller that makes creative use of the slasher, action and adventure tropes that have come before it. However, the content within whether that be the role of the Mayor, the actions of Chief Brody, or the relationship between Quint and Hooper, shows that Jaws can be a representative of a deeper reading. One that can infer that the events surrounding outside the world of the film are shown within the text. The events of the late 1960s and early 1970s are interwoven into the fabric of the film, this is shown by what is representative of Hollywood, what is shown to be American involvement in the Vietnam War, and the actions of the Nixon administration domestically.